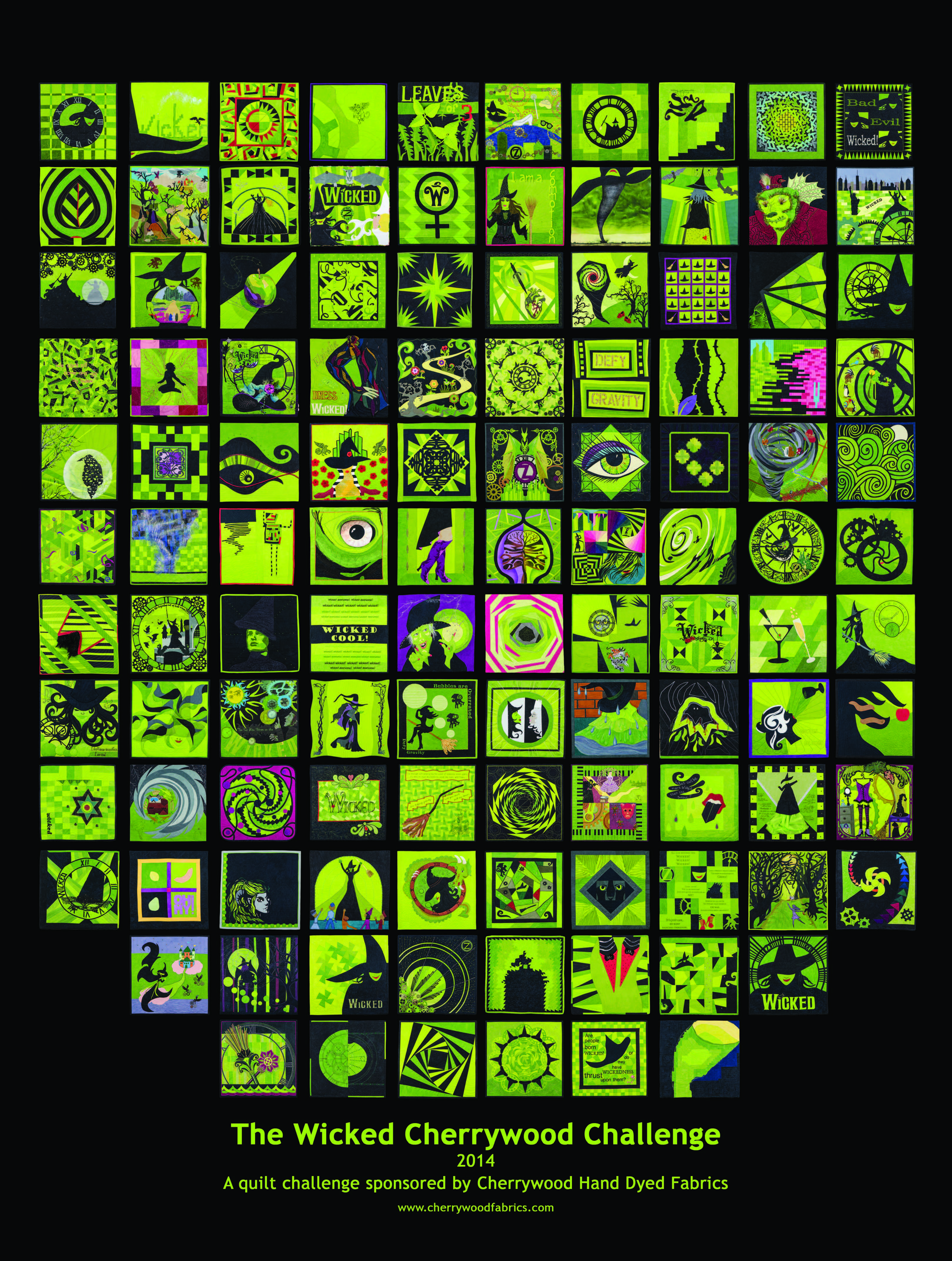 The idea for The WICKED Cherrywood Challenge was born while planning a trip to New York City for the Quilt Alliance "Quilters Take Manhattan." A group of quilters went to see the musical production. Inspired by the spectacular set, amazing costumes, and meaningful story of WICKED, Karla Overland (owner of Cherrywood) developed the parameters for the first Cherrywood Challenge. The idea was pitched to the producers of WICKED who embraced it, agreeing to display the finalists in the Gershwin Theater in New York City as an added incentive.

In early 2014, an open invitation was announced for quilters and fiber artists to submit a 20" x 20" quilt using any techniques they chose. Quilts had to be made entirely from Cherrywood, primarily using Onyx (black) and our three Wicked Greens dyed exclusively for this challenge. By the August 1st deadline, we had received a surprising 114 quilts! Five judges had the impossible task of narrowing down the results to 27 Finalists, including prize winners.

The Finalist quilts hung on Broadway for two months, drawing attention and surprise at the non-traditional nature of the quilts.

The exhibit is a cohesive collection of artwork held together by a flood of gorgeous lime green and black. The strong visual impact of this exhibit was due not only to the limited color palette, consistent size, and interesting theme, but also to the amount of thought and detail each artist put into the quilts. Whether inspired by the Broadway hit musical Wicked™ or all the wicked ways of the world, the images in these quilts are wickedly inspirational. It was decided early on that this would be a traveling exhibit - it needs to be shared with the world! Several quilt show companies picked it up as a "Special Exhibit" with the potential to be seen by tens of thousands of viewers. By request, Cherrywood published a photo book to accompany the exhibit. This gorgeous book is a wonderful keepsake and source of inspiration for quilters, non-quilters, fans of WICKED and everyone in between.

Opening Reception 5-7 p.m. on Friday. Open to the public 10 to 4 on Saturday. Come see this unique show before it takes flight and defies gravity!

Karla will present a Trunk Show of Cherrywood quilts and garments, talk about Color Theory and show off the WICKED Challenge Finalists! Maddie Kertay of BadAss Quilters Society has a special prize for any finalist that bought their fabric from SPOOL! Reserve your spot at 423-602-8526. This is during the American Quilters Society Quilt Show where you will find Cherrywood in booth 624.

This is a fundraising event for the Quilt Alliance. Keynote speaker, vendors, Iron Quilter Competition, silent auction, the Cherrywood booth and WICKED quilts! Even if you can't make it to The Big Apple, you can participate by buying a "Home Ticket" and watch online as it happens!

The WICKED Challenge Exhibit will be displayed at The Gershwin Theater (home of WICKED) on Broadway in New York City thru November 2, 2014. The quilts will be seen by every ticket holder, bringing in crowds daily! Photographs of the exhibit will be featured on the Theater's Facebook page. The 11th Anniversary Celebration of WICKED takes place on October 30, 2014.

Cherrywood will also be a vendor at this show, so visit our booth for more information.

Karla will give a presentation on Sat. Feb 14.

After a short break from this show, Cherrywood will once again be a vendor at this show, so stop in our booth to see us! The WICKED display will be right by our booth in the Heritage Ballroom on the third floor. Vote for your favorite quilt and get your name into a drawing for a HUGE stack of Cherrywood!

See the 90-foot Wall of WICKED! Then head down the aisle to the last row to the Cherrywood booth (#2015). It's a tiny booth, but we will have plenty of books and fabric for sale.

We will have a representative vending Cherrywood Fabric at this show.

This is our home-state show, so we have lots in store for the exhibit! Thursday, June 11 at 8:00 pm: WICKED After Hours meet-up at Canal Park Brewery. Free and open to anyone. Just a place to meet and unwind. Friday, June 12 at 8:00 am: Breakfast lecture - "How the WICKED Challenge came to be" by Karla Overland

This is our home-town show! Those in the Brainerd Lakes Area will have one final chance to view this amazing collection before it flies away.

Cherrywood will have a booth at the show.

Cherrywood will have a booth at the show.

• Entry Fee: This include registration form AND the Cherrywood Fabric: three shades of Wicked Green and Black totaling one yard.

• Theme: Anything related to the musical "WICKED." Some images might include Elphaba, the Wicked Witch, flying monkeys, The Emerald City, Glinda, etc. Go to WICKED the Musical or our Pinterest board for inspiration. Haven't seen the show? That's ok - just think about what the word wicked means to you. Is it wicked awesome?

• Quilt tops had to be made completely from Cherrywood Fabric. (The one exception was white which could be a different brand). At least 60% of the quilt had to include the official WICKED Greens and Black. Additional accent colors of Cherrywood were allowed.

• Finished quilt had to have a top, a middle, and a backing with some method of connecting the three layers. Maximum thickness: 1 inch.

• Finalists and winners were chosen by a panel of 6 judges who based their decisions on overall visual impact and strength of design. Names and images were announced on Facebook. The entire exhibit will travel with Cherrywood and as a Special Exhibit at quilt shows for at least a year. All quilts will be photographed for use by Cherrywood and returned to owner, unless donated to "Broadway Cares/Equity Fights Aids" online auctions. More information to come.